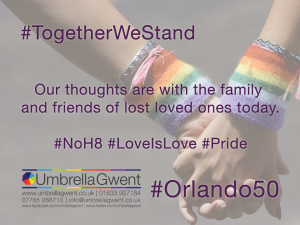 This weekend we’ve been devastated as a global community.

The atrocities have hit us hard, and our condolences go out to all the family and friends who have lost loved ones, and to those who have been injured in the Orlando shooting.  There are no words to express how sad we are to hear the news, and it’s with the deepest sympathy and heavy hearts we write this message.

Much has been reported over the last 48 hours, and we’ve heard with tears in our eyes as the victims have been named.  We’ve heard how some of those tragically killed in the massacre were sending messages to their loved ones before they were cruelly shot.  50 people were killed, and 52 more are reported to have been injured.  Every life taken was precious, and this has been a devastation that has affected the LGBTIQ community the world over.

Today we stand together with our global family, and share in our collective loss.  The events of this weekend will be felt without geographical boundaries and will last a long time.

The media has exploded with news and comment that has felt islamophobic.  We must recognise today that these were the actions of one man, and we want to be clear, we will not tolerate hate in any form.  Now more than ever, we must support and embrace diversity and protect those who would be subject to hate, prejudice and discrimination.  We particularly stand in solidarity today with our Muslim members of the LGBTIQ community.

“The impacts of such a brutal attack on our community reach far and wide, knocking people across the world in so many ways.  Confidence will be hit, fear of hate and crime will increase, mental health of people within the community will be affected.  This isolated event will have a lasting impact, and because of this we recognise the need for support and strength in the community standing together.  Here at Umbrella Gwent, we are offering to support anyone who has been upset or shaken up by these events, and would urge anyone to call us if they need to talk about how they are feeling.  We also hope that people will be mindful of hate in all forms, and help us stop it.”

Today, Gwent Police and the Office for the Police and Crime Commissioner for Gwent stand by our side today to send a message of condolences to the family and friends of those we’ve lost.  Gwent Police are flying the rainbow flag at half-mast to pay tribute to those whose lives have been taken from us.  The Chief Constable for Gwent Police, Jeff Farrar said:

“I am shocked and saddened by the terrorist attack in Orlando over the weekend.  This attack was not only the most deadly shooting in American history but also an act of hatred towards the LGBT Community.  All of our thoughts and prayers go out to those who have been affected by this dreadful massacre of innocent people.”

Gwent Police also have an LGB&T staff network, the Chair of the network Sgt. Jo Melen has also provided a statement saying:

“The horrific events in Florida are a timely reminder that hatred towards the LGBT community is ever present. At Gwent Police we recognise that all hate crime, in whatever form, is completely unacceptable. A poison that blights communities and the lives of people. We stand by the LGBT community at this difficult time and send our thoughts to all those affected. The LGBT community has a history to coming together in the face of hatred and we will do so now. Gwent Police has specialist hate crime support officers who are trained to support victims of hate crime. We urge anyone who experiences hate crime on the grounds of their sexual orientation or gender expression to report it.”

The Police and Crime Commissioner for Gwent added:

“Our hearts go out to all those affected by the horrific incidents in Orlando over the weekend. Today we stand together in solidarity to remember all those who lost their lives in this shocking hate crime terrorist attack which has sent shock waves all over the world. There should be no room for crimes of this nature in today’s society and this is why it’s vital that we work with our communities and organisations like Umbrella Gwent to raise awareness about hate crimes.

We have to teach people that hate abuse is wrong from a young age. It’s about making even more people aware of diversity and the effects of homophobic or transgender abuse and enabling them to challenge racism and promote equality.”

Umbrella Gwent provides a range of support services with aims to advance gender and sexual orientation equality and inclusion across Wales.

Umbrella Gwent is also a partner agency within Connect Gwent and as such can provide enhanced support through the service to people of Gwent.  Connect Gwent Coordinator, Johanna Robinsons remarks:

“At this horrific time, it could be all too easy to be polarized into our individual communities, but I believe that we should stand together.  At Connect Gwent we encourage people to seek support from ourselves or specialist agencies if they have been affected by these events, either today or in the future.  The most powerful impact we can have today is to come together against hate, and not allow the actions of one person to divide us.”

“Please be safe out there, and contact us if you would like to talk about anything.  Together we stand in solidarity against all forms of hate.”